An Excerpt from Les Miserables 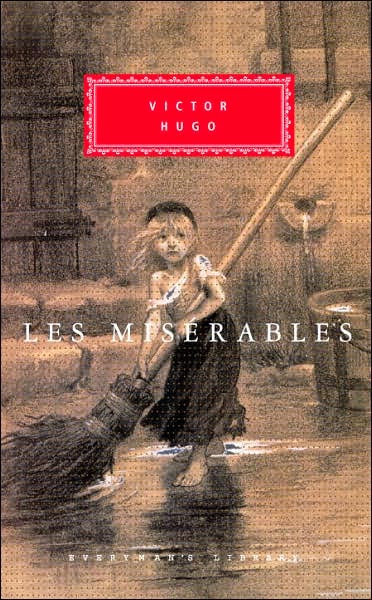 The scene: Paris, June 1832. A small number of insurgents (about 30 men) barricade themselves in a street corner, all expecting to be killed by loyalist forces (the police). Many of them are already dead.

Jean Valjean : An escaped convict who spent 19 years as a galley slave for stealing a loaf of bread.

Javert : A heartless man (police) who pursues Jean Valjean relentlessly for 17 years. Jean Valjean had narrowly escaped capture by Javert a few days earlier. In this scene he has infiltrated the insurgents, and was discovered and tied up.

Enjolras : the leader of insurgents

Marius : one of the insurgents (he becomes their co-leader with a heroic act)

He (Enjolras) said to Marius:  "We are the two chiefs; I will give the last orders within. You stay outside and watch."

Marius posted himself for observation upon the crest of the barricade.

These dispositions made, he turned towards Javert, and said to him:
"I won't forget you."
And, laying a pistol on the table, he added:
"The last man to leave this room will blow out the spy's brains!"
"Here?" inquired a voice.
"No, do not leave this corpse with ours.  You can climb over the little barricade on the Rue Mondetour.  It is only four feet high.  The man is well tied.  You will take him there, and execute him there."
There was one man, at that moment, who was more impassive than Enjolras; it was Javert.
Here Jean Valjean appeared.
He was in the throng of insurgents.  He stepped forward, and said to Enjolras:
"You are the commander?"
"Yes."
"You thanked me just now."
"In the name of the republic.  The barricade has two saviors, Marius Pontmercy and you."
"Do you think that I deserve a reward?"
"Certainly."
"Well, I ask one."
"What?"
"To blow out that man's brains myself."
Javert raised his head, saw Jean Valjean, made an imperceptible movement, and said:
"That is appropriate."
As for Enjolras, he had begun to reload his carbine; he cast his eyes about him:
"No objection."
And turning towards Jean Valjean:  "Take the spy."
Jean Valjean, in fact, took possession of Javert by sitting down on the end of the table.  He caught up the pistol, and a slight click announced that he had cocked it.
When Jean Valjean was alone with Javert, he untied the rope that held the prisoner by the middle of the body, the knot of which was under the table.  Then he motioned to him to get up.
Javert obeyed, with that undefinable smile into which the supremacy of enchained authority is condensed.
Jean Valjean took Javert by the martingale as you would take a beast of burden by a strap, and, drawing him after him, went out of the wine-shop slowly, for Javert, with his legs fettered, could take only very short steps.
Jean Valjean had the pistol in his hand.
They crossed thus the interior trapezium of the barricade.  The insurgents, intent upon the imminent attack, were looking the other way.
Marius, alone, placed towards the left extremity of the wall, saw them pass.  This group of the victim and the executioner borrowed a light from the sepulchral gleam which he had in his soul.
Jean Valjean, with some difficulty, bound as Javert was, but without letting go of him for a single instant, made him scale the little entrenchment on the Rue Mondetour.
When they had climbed over this wall, they found themselves alone in the little street.  Nobody saw them now.  The corner of the house hid them from insurgents.  The corpses carried out from the barricades made a terrible mound a few steps off.
Jean Valjean put the pistol under his arm, and fixed upon Javert a look which had no need of words to say:  "Javert, it is I."
Javert answered.
"Take your revenge."
Jean Valjean took a knife out of his pocket, and opened it.
"A surin!" exclaimed Javert.  "You are right.  That suits you better."
Jean Valjean cut the martingale which Javert had about his neck, then he cut the ropes which he had on his wrists, then, stooping down, he cut the cord which he had on his feet; and, rising, he said to him:
"You are free."
...
When Javert was gone, Jean Valjean fired the pistol in the air.
Then he reentered the barricade and said: "It is done."


Any comments on this snippet?