Jean Valjean, the main character, is released with a small wage from the galleys he had served 19 years for breaking a pane of glass and taking a loaf of bread to feed his sister's seven little children. ("He entered the galleys sobbing and shuddering: he went out hardened; he entered in despair: he went out sullen.") After traveling all day, he seeks a place to eat and sleep in the town of Digne, but is turned away by the innkeepers as an ex-convict. Only Bishop Bienvenu welcomes him to his residence and feeds him for free. Deep in the night Valjean steals a basket of silver plates and flees. 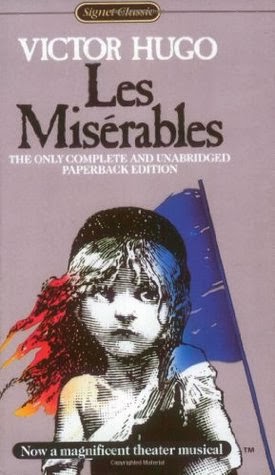 
Just as the brother (the bishop) and sister (who lives with him) were rising from the table, there was a knock at the door.
"Come in," said the bishop.
The door opened.  A strange, fierce group appeared on the threshold.  Three men were holding a fourth by the collar.  The three men were gendarmes (cops); the fourth Jean Valjean.
A brigadier of gendarmes, who appeared to head the group, was near the door.  He advanced towards the bishop, giving a military salute.
"Monseigneur," said he--
At this word Jean Valjean, who was sullen and seemed entirely cast down, raised his head with a stupefied air--
"Monseigneur!" he murmured, "then it is not the curé!"
"Silence!" said a gendarme, "it is monseigneur, the bishop."
In the meantime Monseigneur Bienvenu had approached as quickly as his great age permitted:
"Ah, there you are!" said he, looking towards Jean Valjean, "I am glad to see you.  But!  I gave you the candlesticks also, which are silver like the rest, and would bring two hundred francs.  Why did you not take them along with your plates?"
Jean Valjean opened his eyes and looked at the bishop with an expression which no human tongue could describe.
"Monseigneur," said the brigadier, "then what this man said was true?  We met him.  He was going like a man who was running away, and we arrested him in order to see.  He had this silver."
"And he told you," interrupted the bishop, with a smile, "that it had been given him by a good old priest with whom he had passed the night.  I see it all.  And you brought him back here?  It is all a mistake."
"If that is so," said the brigadier, "we can let him go."
"Certainly," replied the bishop.
The gendarmes released Jean Valjean, who shrank back--
"Is it true that they let me go?" he said in a voice almost inarticulate, as if he were speaking in his sleep.
"Yes! you can go.  Do you not understand?" said a gendarme.
"My friend," said the bishop, "before you go away, here are your candlesticks; take them."
He went to the mantelpiece, took the two candlesticks, and brought them to Jean Valjean.  The two women beheld the action without a word, or gesture, or look, that might disturb the bishop.
Jean Valjean was trembling in every limb.  He took the two candlesticks mechanically, and with a wild appearance.
"Now," said the bishop, "go in peace.  By the way, my friend, when you come again, you need not come through the garden.  You can always come in and go out by the front door.  It is closed only with a latch, day or night."
Then turning to the gendarmes, he said:
"Messieurs, you can retire."  The gendarmes withdrew.
Jean Valjean felt like a man who is just about to faint.
The bishop approached him, and said, in a low voice:
"Forget not, never forget that you have promised me to use this silver to become an honest man."
Jean Valjean, who had no recollection of this promise, stood confounded.  The bishop had laid much stress upon these words as he uttered them.  He contined, solemnly:
"Jean Valjean, my brother:  you belong no longer to evil, but to good.  It is your soul that I am buying for you.  I withdraw it from dark thoughts and from the spirit of perdition, and I give it to God!"

(On his way out of the town Jean Valjean takes a coin from a boy. Realizing his wrongdoing he searches for the boy, to no avail. He settles in a town with name Father Madeleine, develops a simpler method of manufacturing trinkets, and make himself and the town rich. He gives much to charity, yet his savings alone is over six hundred thousand francs (perhaps billions of dollars today). When people finds out he is an honest man, they clamor to make him the mayor.)

The second excerpt will be posted next week.