Excerpts from The Grapes of Wrath (1)

"Don't yell," said Tom. "Let's creep up on 'em, like," and he walked so fast that the dust rose as high as his waist.  And then he came to the edge of the cotton field.  Now they were in the yard proper, earth beaten hard, shiny hard, and a few dusty crawling weeds on the ground.  And Joad slowed as though he feared to go on.  The preacher, watching him, slowed to match his step.  Tom sauntered forward, sidled embarrassedly toward the truck.  It was a Hudson Super-Six sedan, and the top had been ripped in two with a cold chisel.  Old Tom Joad stood in the truck bed and he was nailing on the top rails of the truck sides.  His grizzled, bearded face was low over his work, and a bunch of six-penny nails stuck out of his mouth.  He set a nail and his hammer thundered it in.  From the house came the clash of a lid on the stove and the wail of a child.  Joad sidled up to the truck bed and leaned against it.  And his father looked at him and did not see him.  His father set another nail and drove it in.  A flock of pigeons started from the deck of the tank house and flew around and settled again and strutted to the edge to look over; white pigeons and blue pigeons and grays, with iridescent wings. 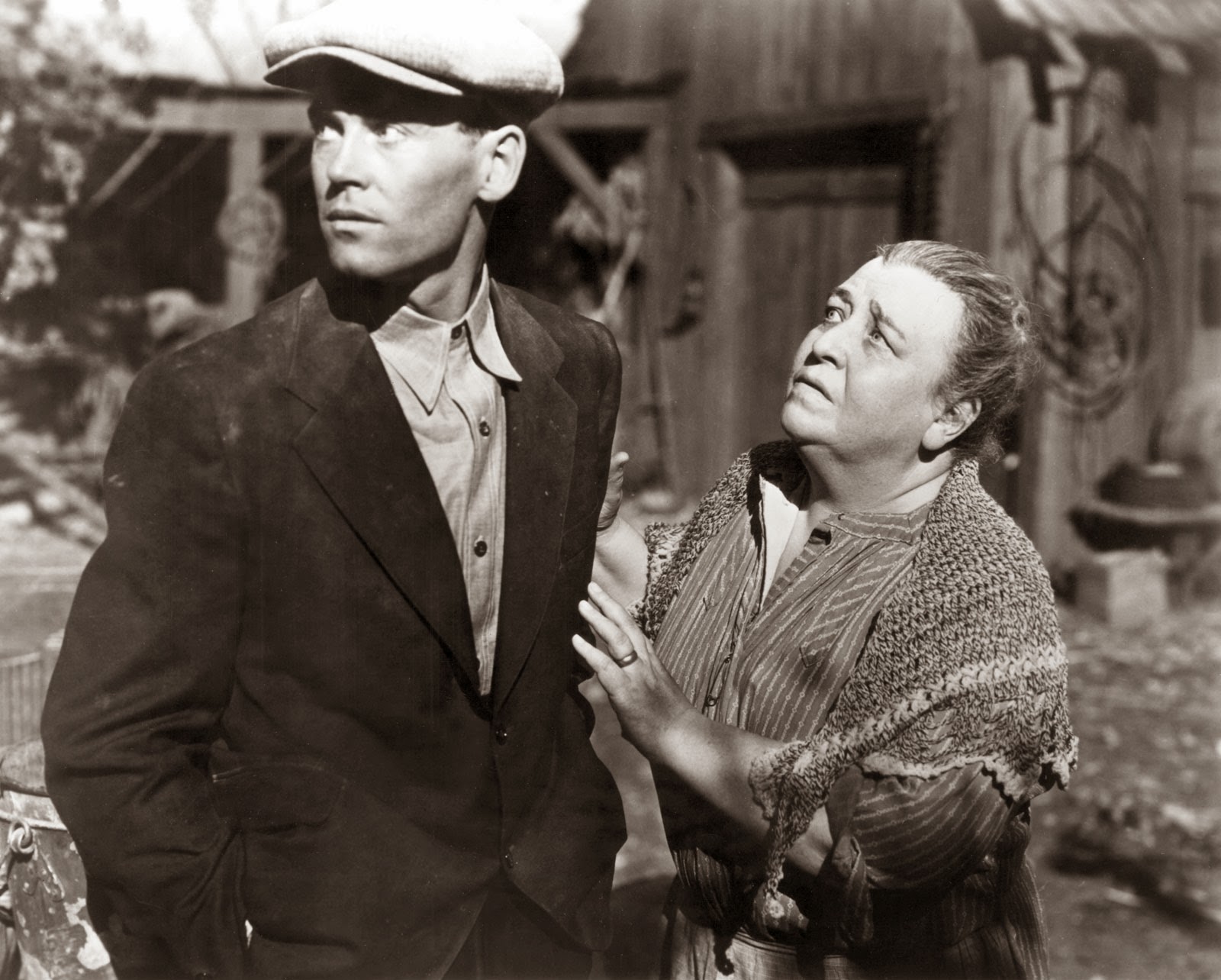 Joad hooked his fingers over the lowest bar of the truck side.  He looked up at the aging, graying man on the truck.  He wet his thick lips with his tongue, and he said softly, "Pa."

"What do you want?" old Tom mumbled around his mouthful of nails.  He wore a black, dirty slouch hat and a blue work shirt over which was a buttonless vest; his jeans were held up by a wide harness-leather belt with a big square brass buckle, leather and metal polished from years of wearing and his shoes were cracked and the soles swollen and boat-shaped from years of sun and wet and dust.  The sleeves of his shirt were tight on his forearms, held down by the bulging powerful muscles.  Stomach and hips were lean, and legs, short, heavy, and strong.  His face, squared by a bristling pepper and salt beard, was all drawn down to the forceful chin, a chin thrust out and built out by the stubble beard which was not so grayed on the chin, and gave weight and force to its thrust.  Over old Tom's unwhiskered cheek bones the skin was as brown as meerschaum, and wrinkled in rays around his eye-corners from squinting.  His eyes were brown, black-coffee brown, and he thrust his head forward when he looked at a thing, for his bright dark eyes were failing.  His lips, from which the big nails protruded, were thin and red.

He held his hammer suspended in the air, about to drive a set nail, and he looked over the truck side at Tom, looked resentful at being interrupted.  And then his chin drove forward and his eyes looked at Tom's face, and then gradually his brain became aware of what he saw.  The hammer dropped slowly to his side, and with his left hand he took the nails from his mouth.  And he said wonderingly, as though he told himself the fact, "It's Tommy--"  And then, still informing himself, "It's Tommy come home."  His mouth opened again, and a look of fear came into his eyes.  "Tommy," he said softly, "you ain't busted out?  You ain't got to hide?"  He listened tensely.

Old Tom laid his hammer gently on the floor and put his nails in his pocket.  He swung his leg over the side and dropped lithely to the ground, but once beside his son he seemed embarrassed and strange.  "Tommy," he said, "we are goin' to California.  But we was gonna write you a letter an' tell you."  And he said, incredulously, "But you're back.  You can go with us.  You can go!"  The lid of a coffee pot slammed in the house.  Old Tom looked over his shoulder.  "Le's surprise 'em," he said, and his eyes shone with excitement.  "Your ma got a bad feelin' she ain't never gonna see you no more.  She got that quiet look like when somebody died.  Almost she don't want to go to California, fear she'll never see you no more."  A stove lid clashed in the house again.  "Le's surprise 'em," old Tom repeated.  "Le's go in like you never been away.  Le's jus' see what your ma says."  At last he touched Tom, but touched him on the shoulder, timidly, and instantly took his hand away.  He looked at Jim Casy.

Tom said, "You remember the preacher, Pa.  He come along with me."

"He been in prison too?"

"To his folks," the preacher amended quickly.  "We stayed at the other place last night."

Pa's chin thrust out, and he looked back down the road for a moment.  Then he turned to Tom.  "How'll we do her?" he began excitedly.  "S'pose I go in an' say, 'Here's some fellas want some breakfast,' or how'd it be if you jus' come in an' stood there till she seen you?  How'd that be?"  His face was alive with excitement.

"Come on," said Pa, "come on in now.  She got to see you.  I got to see her face when she sees you.  Come on.  She'll yell breakfast in a minute.  I heard her slap the salt pork in the pan a good time ago."  He led the way across the fine-dusted ground.  There was no porch on this house, just a step and then the door; a chopping block beside the door, its surface matted and soft from years of chopping.  The graining in the sheathing wood was high, for the dust had cut down the softer wood.  The smell of burning willow was in the air, and, as the three men neared the door, the smell of frying side-meat and the smell of high brown biscuits and the sharp smell of coffee rolling in the pot.  Pa stepped up into the open doorway and stood there blocking it with his wide short body.  He said, "Ma, there's a couple fellas jus' come along the road, an' they wonder if we could spare a bite."

Tom heard his mother's voice, the remembered cool, calm drawl, friendly and humble.  "Let 'em come," she said.  "We got a-plenty.  Tell 'em they got to wash their han's.  The bread is done.  I'm jus' takin' up the side-meat now."  And the sizzle of the angry grease came from the stove.

Pa stepped inside, clearing the door, and Tom looked in at his mother.  She was lifting the curling slices of pork from the frying pan.  The oven door was open, and a great pan of high brown biscuits stood waiting there.  She looked out the door, but the sun was behind Tom, and she saw only a dark figure outlined by the bright yellow sunlight.  She nodded pleasantly.  "Come in," she said.  "Jus' lucky I made plenty bread this morning."

Tom stood looking in.  Ma was heavy, but not fat; thick with childbearing and work.  She wore a loose Mother Hubbard of gray cloth in which there had once been colored flowers, but the color was washed out now, so that the small flowered pattern was only a little lighter gray than the background.  The dress came down to her ankles, and her strong, broad, bare feet moved quickly and deftly over the floor.  Her thin, steel-gray hair was gathered in a sparse wispy knot at the back of her head.  Strong, freckled arms were bare to the elbow, and her hands were chubby and delicate, like those of a plump little girl.  She looked out into the sunshine.  Her full face was not soft; it was controlled, kindly.  Her hazel eyes seemed to have experienced all possible tragedy and to have mounted pain and suffering like steps into a high calm and a superhuman understanding.  She seemed to know, to accept, to welcome her position, the citadel of the family, the strong place that could not be taken.  And since old Tom and the children could not know hurt or fear unless she acknowledged hurt and fear, she had practiced denying them in herself.  And since, when a joyful thing happened, they looked to see whether joy was on her, it was her habit to build up laughter out of inadequate materials.  But better than joy was calm.  Imperturbability could be depended upon.  And from her great and humble position in the family she had taken dignity and a clean calm beauty.  From her position as healer, her hands had grown sure and cool and quiet; from her position as arbiter she had become as remote and faultless in judgment as a goddess.  She seemed to know that if she swayed the family shook, and if she ever really deeply wavered or despaired the family would fall, the family will to function would be gone.

She looked out into the sunny yard, at the dark figure of a man.  Pa stood near by, shaking with excitement.  "Come in," he cried.  "Come right in, mister."  And Tom a little shamefacedly stepped over the doorsill.

She looked up pleasantly from the frying pan.  And then her hand sank slowly to her side and the fork clattered to the wooden floor.  Her eyes opened wide, and the pupils dilated.  She breathed heavily through her open mouth.  She closed her eyes.  "Thank God," she said.  "Oh, thank God!"  And suddenly her face was worried.  "Tommy, you ain't wanted?  You didn' bust loose?"

She moved toward him lithely, soundlessly in her bare feet, and her face was full of wonder.  Her small hand felt his arm, felt the soundness of his muscles.  And then her fingers went up to his cheek as a blind man's fingers might.  And her joy was nearly like sorrow.  Tom pulled his underlip between his teeth and bit it.  Her eyes went wonderingly to his bitten lip, and she saw the little line of blood against his teeth and the trickle of blood down his lip.  Then she knew, and her control came back, and her hand dropped.  Her breath came out explosively.  "Well!" she cried.  "We come mighty near to goin' on without ya.  An' we was wonderin' how in the worl' you could ever find us."  She picked up the fork and combed the boiling grease and brought out a dark curl of crisp pork.  And she set the pot of tumbling coffee on the back of the stove.