Excerpts from The Grapes of Wrath (3) 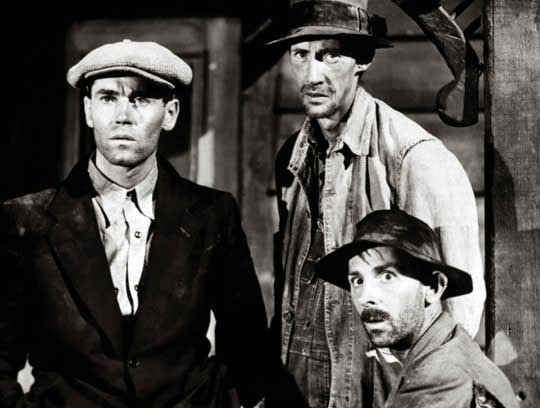 Tom brought out his bag of tobacco, a limp gray rag by now, with a little damp tobacco dust in the bottom of it.  He made a lean cigarette and tossed the bag away.  "We'll go along pretty soon," he said.

Pa spoke generally to the circle.  "It's dirt hard for folks to tear up an' go.  Folks like us that had our place.  We ain't shif'less.  Till we got tractored off, we was people with a farm."

"Sure we was sharecroppin'.  Use' ta own the place."

The young man faced forward again.  "Same as us," he said.

Near the edge of the porch a ragged man stood.  His black coat dripped torn streamers.  The knees were gone from his dungarees.  His face was black with dust, and lined where sweat had washed through.  He swung his head toward Pa.  "You folks must have a nice little pot a money."

The ragged man stared while Pa spoke, and then he laughed, and his laughter turned to a high whinnying giggle.  The circle of faces turned to him.  The giggling got out of control and turned into coughing.  His eyes were red and watering when he finally controlled the spasms.  "You goin' out there--oh, Christ!"  The giggling started again.  "You goin' out an' get--good wages--oh, Christ!"  He stopped and said slyly, "Pickin' oranges maybe?  Gonna pick peaches?"

Pa's tone was dignified.  "We gonna take what they got.  They got lots a stuff to work in."  The ragged man giggled under his breath.

Tom turned irritably.  "What's so goddamn funny about that?"

The ragged man shut his mouth and looked sullenly at the porch boards.  "You folks all goin' to California, I bet."

The faces turned quickly toward him.  The men were rigid.  The hiss of the lantern dropped to a sigh and the proprietor lowered the front chair legs to the porch, stood up, and pumped the lantern until the hiss was sharp and high again.  He went back to his chair, but he did not tilt back again.  The ragged man turned toward the faces.  "I'm goin' back to starve.  I ruther starve all over at oncet."

Pa said, "What the hell you talkin' about?  I got a han'bill says they got good wages, an' little while ago I seen a thing in the paper says they need folks to pick fruit."

The ragged man turned to Pa.  "You got any place to go, back home?"

"You wouldn' go back then?"

"Then I ain't gonna fret you," said the ragged man.

" 'Course you ain't gonna fret me.  I got a han'bill says they need men.  Don't make no sense if they don't need men.  Costs money for them bills.  They wouldn' put 'em out if they didn' need men."

Pa said angrily, "You done some jackassin'.  You ain't gonna shut up now.  My han'bill says they need men.  You laugh an' say they don't.  Now, which one's a liar?"

The ragged man looked down into Pa's angry eyes.  He looked sorry.  "Han'bill's right," he said.  "They need men."

"Then why the hell you stirrin' us up laughin'?"

" 'Cause you don't know what kind a men they need."

"What you talkin' about?"

The ragged man reached a decision.  "Look," he said.  "How many men they say they want on your han'bill?"

"Eight hundred, an' that's in one little place."

"Give the name a the fella--says so and so, labor contractor?"

Pa reached in his pocket and brought out the folded handbill.  "That's right.  How'd you know?"

"Look," said the man.  "It don't make no sense.  This fella wants eight hundred men.  So he prints up five thousand of them things an' maybe twenty thousan' people sees 'em.  An' maybe two-three thousan' folks gets movin' account a this here han'bill.  Folks that's crazy with worry."

"Not till you see the fella that put out this here bill.  You'll see him, or somebody that's workin' for him.  You'll be a-campin' by a ditch, you an' fifty other famblies.  An' he'll come in.  He'll look in your tent an' see if you got anything lef' to eat.  An' if you got nothin', he says, 'Wanna job?'  An' you'll say, 'I sure do, mister.  I'll sure thank you for a chance to do some work.'  An' he'll say, 'I can use you.'  An' you'll say, 'When do I start?'  An' he'll tell you where to go, an' what time, an' then he'll go on.  Maybe he needs two hunderd men, so he talks to five hunderd, an' they tell other folks, an' when you get to the place, they's a thousan' men.  This here fella says, 'I'm payin' twenty cents an hour.'  An' maybe half a the men walk off.  But they's still five hunderd that's so goddamn hungry they'll work for nothin' but biscuits.  Well, this here fella's got a contract to pick them peaches or--chop that cotton.  You see now?  The more fellas he can get, an' the hungrier, less he's gonna pay.  An' he'll get a fella with kids if he can, 'cause--hell, I says I wasn't gonna fret ya."  The circle of faces looked coldly at him.  The eyes tested his words.  The ragged man grew self-conscious.  "I says I wasn't gonna fret ya, an' here I'm a-doin' it.  You gonna go on.  You ain't goin' back."  The silence hung on the porch.  And the light hissed, and a halo of moths swung around and around the lantern.  The ragged man went on nervously, "Lemme tell ya what to do when ya meet that fella says he got work.  Lemme tell ya.  Ast him what he's gonna pay.  Ast him to write down what he's gonna pay.  Ast him that.  I tell you men you're gonna get fooled if you don't."

The proprietor leaned forward in his chair, the better to see the ragged dirty man.  He scratched among the gray hairs on his chest.  He said coldly, "You sure you ain't one of these here troublemakers?  You sure you ain't a labor faker?"

And the ragged man cried, "I swear to God I ain't!"

"They's plenty of 'em," the proprietor said.  "Goin' aroun' stirrin' up trouble.  Gettin' folks mad.  Chiselin' in.  They's plenty of 'em.  Time's gonna come when we string 'em all up, all them troublemakers.  We gonna run 'em outa the country.  Man wants to work, O.K.  If he don't--the hell with him.  We ain't gonna let him stir up trouble."

The ragged man drew himself up.  "I tried to tell you fellas," he said.  "Somepin it took me a year to find out.  Took two kids dead, took my wife dead to show me.  But I can't tell you.  I should of knew that.  Nobody couldn't tell me, neither.  I can't tell ya about them little fellas layin' in the tent with their bellies puffed out an' jus' skin on their bones, an' shiverin' an' whinin' like pups, an' me runnin' aroun' tryin' to get work--not for money, not for wages!" he shouted.  "Jesus Christ, jus' for a cup a flour an' a spoon a lard.  An' then the coroner come.  'Them children died a heart failure,' he said.  Put it on his paper.  Shiverin', they was, an' their bellies stuck out like a pig bladder."
Posted by owenchoi.com at 9:07 AM