Excerpts from The Grapes of Wrath (5) 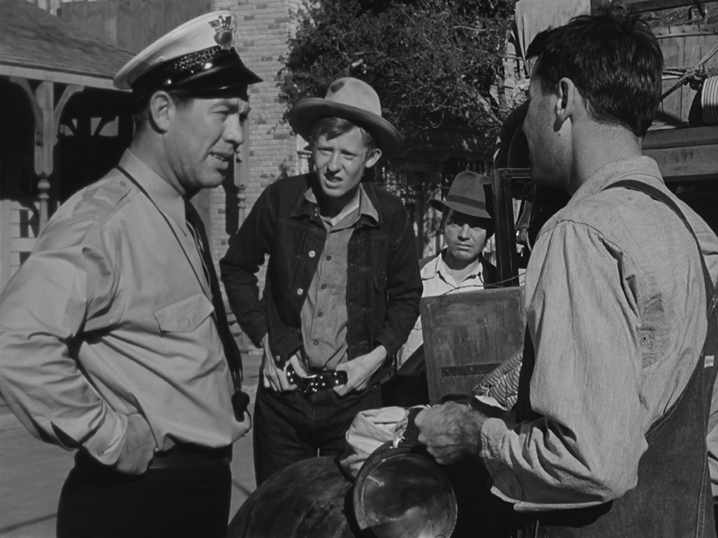 The man said, "You men want to work?"  Still they looked quietly, suspiciously.  And men from all over the camp moved near.

One of the squatting men spoke at last.  "Sure we wanta work.  Where's at's work?"

"Tulare County.  Fruit's opening up.  Need a lot of pickers."

Floyd spoke up.  "You doin' the hiring?"

The men were in a compact group now.  An overalled man took off his black hat and combed back his long black hair with his fingers.  "What you payin'?" he asked.

The contractor turned, scowling.  "You telling me how to run my own business?"

"I got a right to run my business my own way.  If you men want to sit here on your ass, O.K.  I'm out getting men for Tulare County.  Going to need a lot of men."

Floyd turned to the crowd of men.  They were standing up now, looking quietly from one speaker to the other.  Floyd said, "Twice now I've fell for that.  Maybe he needs a thousan' men.  He'll get five thousan' there, an' he'll pay fifteen cents an hour.  An' you poor bastards'll have to take it 'cause you'll be hungry.  'F he wants to hire men, let him hire 'em an' write it out an' say what he's gonna pay.  Ast ta see his license.  He ain't allowed to contract men without a license."

The contractor turned to the Chevrolet and called, "Joe!"  His companion looked out and then swung the car door open and stepped out.  He wore riding breeches and laced boots.  A heavy pistol holster hung on a cartridge belt around his waist.  On his brown shirt a deputy sheriff's star was pinned.  He walked heavily over.  His face was set to a thin smile.  "What you want?"  The holster slid back and forth on his hip.

"Ever see this guy before, Joe?"

The deputy asked "Which one?"

"This fella."  The contractor point ed to Floyd.

"What'd he do?"  The deputy smiled at Floyd.

"Hm-m-m."  The deputy moved slowly around to see Floyd's profile, and the color slowly flowed up Floyd's face.

"Ever see 'im before?" the contractor insisted.

"Hmm, seems like I have.  Las' week when that used-car lot was busted into.  Seems like I seen this fella hangin' aroun'.  Yep!  I'd swear it's the same fella."  Suddenly the smile left his face.  "Get in the car," he said, and he unhooked the strap that covered the butt of his automatic.

The deputy swung around.  " 'F you'd like to go in too, you jus' open your trap once more.  They was two fellas hangin' around that lot."

"Well, maybe you're wanted someplace else.  You keep your trap shut."

The contractor turned back to the men.  "You fellas don't want ta listen to these goddamn reds.  Troublemakers--they'll get you in trouble.  Now I can use all of you in Tulare County."

The deputy turned back to them.  "Might be a good idea to go," he said.  The thin smile was back on his face.  "Board of Health says we got to clean out this camp.  An' if it gets around that you got reds out here--why, somebody might git hurt.  Be a good idea if all you fellas moved on to Tulare.  They isn't a thing to do aroun' here.  That's jus' a friendly way a telling you.  Be a bunch of guys down here, maybe with pick handles, if you ain't gone."

The contractor said, "I told you I need men.  If you don't want to work--well, that's your business."

The deputy smiled.  "If they don't want to work, they ain't a place for 'em in this county.  We'll float 'em quick."

Floyd stood stiffly beside the deputy, and Floyd's thumbs were hooked over his belt.  Tom stole a look at him, and then stared at the ground.

Tom looked slowly up at Floyd's hands, and he saw the strings at the wrists standing out under the skin.  Tom's own hands came up, and his thumbs hooked over his belt.

"Yeah, that's all.  I don't want one of you here by tomorra morning."
The contractor stepped into the Chevrolet.

"Now, you," the deputy said to Floyd, "you get in that car."  He reached a large hand up and took hold of Floyd's left arm.  Floyd spun and swung with one movement.  His fist splashed into the large face, and in the same motion he was away, dodging down the line of tents.  The deputy staggered and Tom put out his foot for him to trip over.  The deputy fell heavily and rolled, reaching for his gun.  Floyd dodged in and out of sight down the line.  The deputy fired from the ground.  A woman in front of a tent screamed and then looked at a hand which had no knuckles.  The fingers hung on strings against her palm, and the torn flesh was white and bloodless.  Far down the line Floyd came in sight, sprinting for the willows.  The deputy, sitting on the ground, raised his gun again and then, suddenly, from the group of men, the Reverend Casy stepped.  He kicked the deputy in the neck and then stood back as the heavy man crumpled into unconsciousness.

The motor of the Chevrolet roared and it streaked away, churning the dust.  It mounted to the highway and shot away.  In front of her tent, the woman still looked at her shattered hand.  Little droplets of blood began to ooze from the wound.  And a chuckling hysteria began in her throat, a whining laugh that grew louder and higher with each breath.

The deputy lay on his side, his mouth open against the dust.

Tom picked up his automatic, pulled out the magazine and threw it into the brush, and he ejected the live shell from the chamber.  "Fella like that ain't got no right to a gun," he said; and he dropped the automatic to the ground.

A crowd had collected around the woman with the broken hand, and her hysteria increased, a screaming quality came into her laughter.

Casy put his head close.  He whispered, "They'll fingerprint you.  You broke parole.  They'll send you back."

Tom drew in his breath quietly.  "Jesus!  I forgot."

"No.  Leave it.  If it's awright to come back, I'll give ya four high whistles."

Tom strolled away casually, but as soon as he was away from the group he hurried his steps, and he disappeared among the willows that lined the river.