Excerpts from The Grapes of Wrath (6) 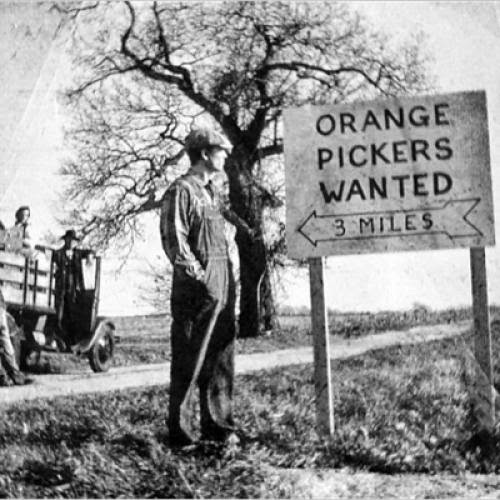 The company's store was a large shed of corrugated iron.  It had no display window.  Ma opened the screen door and went in.  A tiny man stood behind the counter.  He was completely bald, and his head was blue-white.  Large, brown eyebrows covered his eyes in such a high arch that his face seemed surprised and a little frightened.  His nose was long and thin, and curved like a bird's beak, and his nostrils were blocked with light brown hair.  Over the sleeves of his blue shirt he wore black sateen sleeve protectors.  He was leaning on his elbows on the counter when Ma entered.

He inspected her with interest.  The arch over his eyes became higher.  "Howdy."

"Thought I'd get a piece of meat."

"Got all kinds," he said.  "Hamburg, like to have some hamburg?  Twenty cents a pound, hamburg."

"Ain't that awful high?  Seems to me hamburg was fifteen las' time I got some."

"Well," he giggled softly, "yes, it's high, an' same time it ain't high.  Time you go on in town for a couple poun's of hamburg, it'll cos' you 'bout a gallon gas.  So you see it ain't really high here, 'cause you got no gallon a gas."

Ma said sternly, "It didn' cos' you no gallon a gas to get it out here."

Ma put two fingers to her mouth and frowned with thought.  "It looks all full a fat an' gristle."

Ma looked up at him fiercely for a moment.  She controlled her voice.  "Ain't you got some cheaper kind a meat?"

"Ever'body wants meat--needs meat.  That hamburg is purty nice stuff.  Use the grease that comes out a her for gravy.  Purty nice.  No waste.  Don't throw no bone away."

"Well, now you're gettin' into fancy stuff.  Christmas stuff.  Thanksgivin' stuff.  Thirty-five cents a poun'.  I could sell you turkey cheaper, if I had some turkey."

"Sure, it is.  Go right in town an' get her for twelve cents.  Gallon a gas.  What else can I sell you, potatoes?"

"Five pounds for a quarter."

Ma moved menacingly toward him.  "I heard enough from you.  I know what they cost in town."

The little man clamped his mouth tight.  "Then go git 'em in town."

Ma looked at her knuckles.  "What is this?" she asked softly.  "You own this here store?"

"Any reason you got to make fun?  That help you any?"  She regarded her shiny wrinkled hands.  The little man was silent.  "Who owns this here store?"

She looked up, smiling a little.  "Ever'body comes in talks like me, is mad?"

"Doin' a dirty thing like this.  Shames ya, don't it?  Got to act flip, huh?"  Her voice was gentle.  The clerk watched her, fascinated.  He didn't answer.  "That's how it is," Ma said finally.  "Forty cents for meat, fifteen for bread, quarter for potatoes.  That's eighty cents.  Coffee?"

"Yes, ma'am." he said.  "Thanks."  He put the potatoes in a bag and folded the top carefully down.  His eyes slipped to Ma, and then hid in his work again.  She watched him, and she smiled a little.

He placed the four packages on the counter.  "Meat," he said.  "Potatoes, bread, coffee.  One dollar, even."  She handed him her slip of paper and watched while he entered the name and the amount in a ledger.  "There," he said.  "Now we're all even."

"But they're a-workin' out in the field now.  They got more'n a dime comin'.  Gimme ten cents' of sugar.  Tom, he wanted sugar in his coffee.  Spoke about it."

"For anything, ma'am."  He looked pleadingly at her.  And then his face lost its fear.  He took ten cents from his pocket and rang it up in the cash register.  "There," he said with relief.  He pulled a little bag from under the counter, whipped it open and scooped some sugar into it, weighed the bag, and added a little more sugar.  "There you are," he said.  "Now it's all right.  You bring in your slip an' I'll get my dime back."

Ma studied him.  Her hand went blindly out and put the little bag of sugar on the pile in her arm.  "Thanks to you," she said quietly.  She started for the door, and when she reached it, she turned about.  "I'm learnin' one thing good," she said.  "Learnin' it all a time, ever' day.  If you're in trouble or hurt or need--go to poor people.  They're the only ones that'll help--the only ones."  The screen door slammed behind her.

The little man leaned his elbows on the counter and looked after her with his surprised eyes.  A plump tortoise-shell cat leaped up on the counter and stalked lazily near to him.  It rubbed sideways against his arms, and he reached out with his hand and pulled it against his cheek.  The cat purred loudly, and the tip of its tail jerked back and forth.
Posted by owenchoi.com at 9:14 AM