Excerpts from The Grapes of Wrath (7) 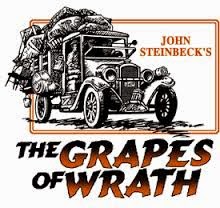 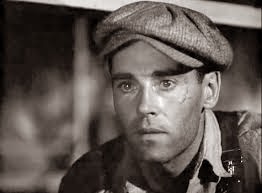 Ma heard a stealthy step among the leaves far to her left, and she grew tense.  She released her knees and straightened her head, the better to hear.  The movement stopped, and after a long moment began again.  A vine rasped harshly on the dry leaves.  Ma saw a dark figure creep into the open and draw near to the culvert.  The black round hole was obscured for a moment, and then the figure moved back.  She called softly, "Tom!"  The figure stood still, so still, so low to the ground that it might have been a stump.  She called again, "Tom, oh, Tom!"  Then the figure moved.

"Right over here."  She stood up and went to meet him.

"Then come along.  Come quiet."  He crossed the little stream, wading carelessly through the water, and Ma followed him.  He moved through the brush, out into a field on the other side of the thicket, and along the plowed ground.  The blackening stems of the cotton were harsh against the ground, and a few fluffs of cotton clung to the stems.  A quarter of a mile they went along the edge of the field, and then he turned into the brush again.  He approached a great mound of wild blackberry bushes, leaned over and pulled a mat of vines aside.  "You got to crawl in," he said.

Ma went down on her hands and knees.  She felt sand under her, and then the black inside of the mound no longer touched her, and she felt Tom's blanket on the ground.  He arranged the vines in place again.  It was lightless in the cave.

"Don't worry.  I been livin' like a rabbit some time."

She heard him unwrap his tin plate.

Ma could not see him at all in the blackness, but she could hear him chewing, tearing at the meat and swallowing.

Ma said uneasily, "Tom--Ruthie tol' about you."  She heard him gulp.

"Well, it wasn' her fault.  Got in a fight, an' says her brother'll lick that other girl's brother.  You know how they do.  An' she tol' that her brother killed a man an' was hidin'."

Tom was chuckling.  "With me I was always gonna get Uncle John after 'em, but he never would do it.  That's jus' kid talk, Ma.  That's awright."

"That's what I said right along.  I was always scared somebody'd see you put stuff in that culvert, an' then they'd watch."

"Come clost, Tom.  Let me feel it.  Come clost."  He crawled near.  Her reaching hand found his head in the blackness and her fingers moved down to his nose, and then over his left cheek.  "You got a bad scar, Tom.  An' your nose is all crooked."

"Maybe tha's a good thing.  Nobody wouldn't know me, maybe.  If my prints wasn't on record, I'd be glad."  He went back to his eating.

"It's the wind, Ma.  Jus' the wind."  The gust poured down the stream, and the trees rustled under its passing.

She crawled close to his voice.  "I wanta touch ya again, Tom.  It's like I'm blin', it's so dark.  I wanta remember, even if it's on'y my fingers that remember.  You got to go away, Tom."

"Hol' out ya han', Tom.  I ain't gonna sleep none if you got no money.  Maybe you got to take a bus, or somepin.  I want you should go a long ways off, three-four hundred miles."

"I thought maybe you could go to a big city.  Los Angeles, maybe.  They wouldn' never look for you there."

"Hm-m," he said.  "Lookie, Ma.  I been all day an' all night hidin' alone.  Guess who I been thinkin' about?  Casy!  He talked a lot.  Used ta bother me.  But now I been thinkin' what he said, an' I can remember--all of it.  Says one time he went out in the wilderness to find his own soul, an' he foun' he didn' have no soul that was his'n.  Says he foun' he jus' got a little piece of a great big soul.  Says a wilderness ain't no good, 'cause his little piece of a soul wasn't no good 'less it was with the rest, an' was whole.  Funny how I remember.  Didn' think I was even listenin'.  But I know now a fella ain't no good alone."

Tom went on, "He spouted out some Scripture once, an' it didn' soun' like no hell-fire Scripture.  He tol' it twicet, an' I remember it.  Says it's from the Preacher."

"Goes, 'Two are better than one, because they have a good reward for their labor.  For if they fall, the one will lif' up his fellow, but woe to him that is alone when he falleth, for he hath not another to help him up.'  That's part of her."

"Jus' a little bit more.  'Again, if two lie together, then they have heat:  but how can one be warm alone?  And if one prevail against him, two shall withstand him, and a three-fold cord is not quickly broken.' "

"Casy said it was.  Called it the Preacher."

"On'y the wind, Ma.  I know the wind.  An' I got to thinkin', Ma--most of the preachin' is about the poor we shall have always with us, an' if you got nothin', why, jus' fol' your hands an' to hell with it, you gonna git ice cream on gol' plates when you're dead.  An' then this here Preacher says two get a better reward for their work."

He was quiet for a long time.  "I been thinkin' how it was in that gov'ment camp, how our folks took care a theirselves, an' if they was a fight they fixed it theirself; an' they wasn't no cops wagglin' their guns, but they was better order than them cops ever give.  I been a-wonderin' why we can't do that all over.  Throw out the cops that ain't our people.  All work together for our own thing--all farm our own lan'."

"But they killed him."

"Yeah," said Tom.  "He didn' duck quick enough.  He wasn' doing nothin' against the law, Ma.  I been thinkin' a hell of a lot, thinkin' about our people livin' like pigs, an' the good rich lan' layin' fallow, or maybe one fella with a million acres, while a hunderd thousan' good farmers is starvin'.  An' I been wonderin' if all our folks got together an' yelled, like them fellas yelled, only a few of 'em at the Hooper ranch---"

Ma said, "Tom, they'll drive you, an' cut you down like they done to young Floyd."

"They gonna drive me anyways.  They drivin' all our people."

Tom laughed uneasily, "Well, maybe like Casy says, a fella ain't got a soul of his own, but on'y a piece of a big one--an' then---"

"Then it don' matter.  Then I'll be all aroun' in the dark.  I'll be ever'where--wherever you look.  Wherever they's a fight so hungry people can eat, I'll be there.  Wherever they's a cop beatin' up a guy, I'll be there.  If Casy knowed, why, I'll be in the way guys yell when they're mad an'--I'll be in the way kids laugh when they're hungry an' they know supper's ready.  An' when our folks eat the stuff they raise an' live in the houses they build--why, I'll be there.  See?  God, I'm talkin' like Casy.  Comes of thinkin' about him so much.  Seems like I can see him sometimes."