Recent Reviews on Tendirls of Life 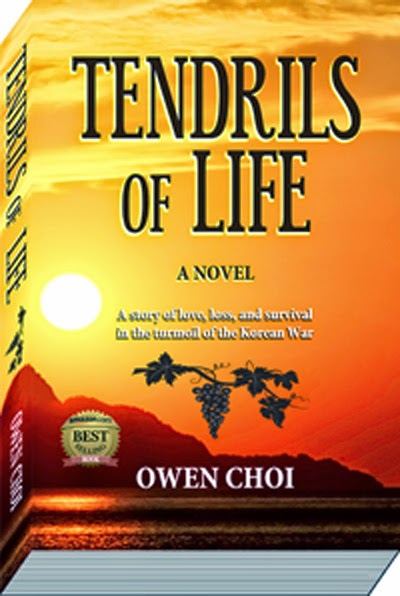 A moving depiction of the impact and meaningless nature of war and the motivational force of love. Regardless of the politics, the human cost is immeasurable. The travails of these characters will haunt you, as will their endless ability to survive. Not being familiar with the Korean war, the history was also fascinating. The only thing missing is a map.

Tendrils of Life by Owen Choi is a well written literary fiction and historical story which touched my heart. The author utilized some facts from history, documentaries, etc. There are illustrations of maps to help you visualize the various areas of the Korean War. I applaud the author. I rate this story five stars but in a sense I'm sorry I read this story because it is such an emotional one. I don't recommend this book to anyone who suffers from depression. Many times I discontinued reading this story. If this story was made into a film, I wouldn't wish to view it. I dreaded picking the book back up to read; the only reason I continued reading it further was because I was hoping the characters would get reunited with their loved ones.

The story depicts the catastrophic effects of wars, spoils of war:
families separated
family members killed
rape, etc.
Their instinct to survive, persevere, endure the torture they went through was greatly felt by me as a reader, as a human being. The various stories of the characters were heartbreaking. The characters walked around nearly dead searching for their loved ones. You'll read the stories of what so many people endured day after day only to get worse with the passing of time. Friends and strangers were willing to share what little they had left. This story had me continuously in tears.

There have been many wars, battles in the world, and most people don't wish to speak of the horrors they have experienced in their life. But, I believe such stories have to be written whether as nonfiction or fictional works to remind each of us how precious life is, to love each other; we don't know what tomorrow holds for us and our loved ones.

Not an easy read, but tells the power of hope even in the horrors of war. I never had any insight into the Korean War before.

113th Review - A different perspective of the Korean War.,

This story line is easy to follow and well written. The characters have so much depth and are easy to get involved with.
I never paid a lot of attention to this war but thought I knew our role and what it was about. Wow does this become an eye opener telling the story from the Korean perspective and it is agonizing to read how much they suffered not just cruelty of their people but from us and all the other countries using them. The writing style is different but easy to follow and the story is gripping, tragic, and touching. I hope this author will offer us more insight into the history of his country.

this is one of the saddest books I have ever read. I now have a much better understanding of the Korean war.
I am grateful to be born in the here and now.

I liked the story okay, not a real cliff hanger, but interesting enough. I did enjoy reading through the perspective of the Korean writer since I did not know a lot about the events leading to the Korean War.

This was one of the best books I've ever read. I felt that I was a charter at times as as I became involved the book. Its quiet long so I may read a second time. Its a sweet love story but also one that opened the door for me to see communism as it is and how terrible human beings can treat each other.

I enjoyed this book because it is about a family during a time in history that really occurred. Even though the book is fictional it does have factual information about situations that occurred during the Korean War. I could not wait to see what was going to happen next.

I never knew too much about the Korean War so this book gave me a lot of history on it. It's main character is a hero not only in my eyes but those of his family and others. Once he loses track of his sister you'll not want to put the book down.

So I technically should have given this book 3 stars but I gave it 4, why? I gave it 4 stars because Amazon has set up it's algorithm so a book that gets 3 stars is punished disproportionally. So it gets a 4. Also I give it a 4 star rating because it is very close to being a 4 star book.
The book is actually very interesting. The story line is something new, South Korea, you don't read a lot of books based in south korea. The N. Koreans are invading and this is a tale following several families and what the war does to them. As I said the story is good, the writing is good, not great but good. The problem lies in the pace of the book. This book should/could have been 100 pages shorter and it would have been a great read. The author just won't let the characters move on and continues to bring us back in circles over and over and over. The author needs to hire a good editor that can cut this book and keep it moving and he would have a very good book on his hands.
As I mentioned before there are a few grammatical errors. Nothing that keeps you from enjoying the book just little things that give you pause for a second then you figure it out. However it doesn't bother me. I would much rather pay $3.99 or below and get a good book, from an Indie, with a few errors than to pay 3X as much (because the author had to hire 3-4 editors to catch all the errors) for an error free book. So please go in with the understanding that there are a few problems. Please don't find a couple of errors and then give him a 1 star because of it.(I see this all the time) 1 star means that you HATE the book. Can a few innocuous errors REALLY cause you to hate a book?
Posted by owenchoi.com at 4:54 AM