The Road Not Taken

Muhammad Ali Only Played Golf Once, But The Story Is Incredible

Muhammad Ali always had the swagger of a champ, no matter what he was doing. So when a golf pro asked the boxing great to take a few swings on the driving range, Ali told him he'd never swung a golf club before -- but he was happy to oblige the pro's request.

AdChoices
A first-hand account from Golf Digest's archives tells the story: It was 1973, and Ali had just returned from a boxing training run on the Stardust Country Club golf course. A pro at the time, Brad Wilson, asked if he could take some photos of Ali swinging a club on the driving range.

"When Wilson handed Ali an 8-iron, the champ asked, 'How ya hold this thing?'" reports Golf Digest. "After putting Ali's hands on the club in a baseball grip, the next question was, 'What do I do now?'"
At Wilson's encouragement, Ali took a swing and hit the ball 140 yards down the middle. He turned to his trainer, Angelo Dundee.

"Ali crowed, 'How 'bout that Angie! You didn't know I was a champion golfer, did you?' Wilson actually felt that despite the unorthodox look, Ali's swing had some desirable elements: good shoulder turn, flexed knees, led the downswing with hips and legs, right elbow close to the side, head down, right shoulder lower than the left, and eyes remain fixed on the ball."

Ali hit a second ball down the range, and was impressed by his success.

"'Look at that ball go! Nobody can knock the ball that far. Nobody but me, the great, the one and only Muhammad Ali!'" he yelled, per Golf Digest. "A crowd of people started gathering to watch, and that just fueled Ali's stage presence.

"He suddenly jumped away from the ball at one point and raised both hands into the air and crowed, 'Muhammad Ali is the world's greatest golfer! Nobody can beat Muhammad Ali! Not Arnold Palmer, not Jack Nicklaus, not nobody. I'm gonna make 'em look bad, predict the score, how bad I'm gonna beat 'em, everything -- just like I do in boxing!'"


Here are the pictures Wilson took of Ali's swing: 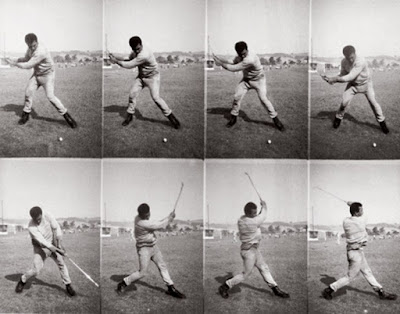 Ali didn't stick with golf, but apparently he took a moment to consider the virtues. After his beautiful shots, he told his trainer: "Hey Angie, let's quit boxing and start playing golf. We'll get rich -- and besides, that ball can't hit back!"